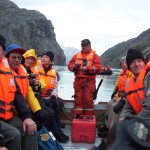 Scientists from the University of Magallanes in Chile have teamed up with colleagues in Argentina at the National Parks Administration, the National University of Tierra del Fuego and the Austral Center for Scientific Research to develop an innovative project that links science & tourism and bridges the historical gap between the two countries in the Tierra del Fuego Archipelago. In general, such collaborative ventures are considered “outreach,” whereby the scientific organization “helps” the private sector. In this project, funded by the Chilean Science and Technological Commission – CONICYT, the dialogue is reciprocal; scientists not only are training local tourism guides, but also involving them in the research and monitoring projects in the archipelago.

The goal is to value the deep knowledge and capacity of the tourism industry to generate new information, monitor its own impacts and provide a service to the academic community by helping implement a monitoring and sampling network in remote parts of Tierra del Fuego, where few scientists venture. Working in this pilot effort with the company Cruceros Australis, the project’s directors have begun five new data collection protocols: a) following of plant phenology, b) description of intertidal marine communities, c) monitoring of invasive species and birds, d) sampling ocean chemistry and e) recording trash throughout the navigation routes. In this way, scientists and the private sector hope to promote a binational approach to sustainable development options via ecotourism and also implement much needed long-term research and monitoring in one of the world’s most remote archipelagos.