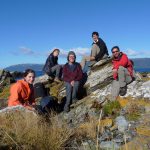 During the summer of 2018, I had the opportunity and pleasure to participate in the Huillín Project. The huillín is known in English as the southern river otter and it inhabits the coastal ecosystems (despite its name) of Tierra del Fuego, including Staten Island. Our team was integrated by several Biology students from the Universidad Nacional de Tierra del Fuego (UNTDF), a Biology student from Northern Arizona University and myself – Celina Goodall, an Environmental Science student from UNTDF. Dr. Alejandro Valenzuela was the project leader and is a professor at UNTDF, who has been working on this species for several years, and he taught us what we needed to know about this endangered otter and guided our work in this research project.

The field work we conducted do consisted of preparing and analyzing otter scat samples under an dissecting microscope to study the huillin’s diet. We also categorized and cataloged photos and videos taken with camera traps from Tierra del Fuego National Park and Staten Island. And of course the best part was doing field trips to places like Moat Ranch, where we conducted otter presence surveys. We would rotate between the different tasks, which made the work go fasters and was fun. Working with the scat was smelly at first, but you get used to it fairly quickly! While cataloging the camera trap images, we would come across with some with which you would just get in awe with the huillín; it’s such an adorable species! But definitely the most fun were the field trips, we would jump over rocks and logs along the shoreline, looking for signs of otter presence, such as scat and dens. We would also check out and install camera traps where needed, thanks to several research projects and also donations from Friends of OSARA. In summary, it was a enjoyable experience in which I got the chance to learn about a new species and I got know and work with new people.