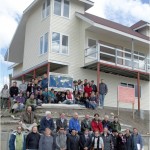 An alliance between the Universidad de Magallanes, the Institute of Ecology and Biodiversity, the University of North Texas and several U.S. and Chilean non-profit organizations has opened the world’s first environmental philosophy, science and policy field station at the southern tip of Chile in the village of Puerto Williams.

The new Cape Horn Field Station supports an international network for interdisciplinary environmental research opportunities for faculty, students and affiliated research scholars, helping to place UNT’s work at the forefront of conservation and study in the Cape Horn archipelago.

“The goal is to have students doing research in Chile year-round so they can have a direct experience in crossing language barriers and working with students from other countries, scientists and the local society,” said Dr. Christopher Anderson, UNT assistant research professor of biology and coordinator of the Sub-Antarctic Ecosystems and Biocultural Conservation research cluster and program. “Our mission is not just to do research but to develop long-term, working relationships with local authorities and community members and to make the research socially relevant.”

The research cluster and program has worked to integrate ecological and social aspects of research, education and conservation into a long-term research, education and conservation program. The program’s unique integration of the sciences and ethics with an emphasis on ethno-ecology and environmental philosophy coincides with UNT’s doctoral program that focuses on environmental ethics and philosophy.

Students, scientists, government and university officials, and visitors attended the inauguration, including officials from the Universidad de Magallanes and the Institute of Ecology and Biodiversity, UNT Provost and Vice President of Academic Affairs Warren Burggren, UNT Vice President of Research Vish Prasad and Edgar Muñoz, Commander of the Beagle Channel Naval District. Nelson Carcarmo, Governor of the Chilean Antarctic Province presided over the ribbon-cutting ceremony.

The two and a half story facility has a kitchen, library, classrooms, computer area and laboratory for processing and storing research samples and other field equipment. The station also provides office and lodging space for up to 15 students and researchers during courses and expeditions in the Cape Horn region. Previously, research activities were based at a Universidad de Magallanes-owned facility in Puerto Williams that housed six people.

The new research facility sits inside the UNESCO Cape Horn Biosphere Reserve, a pristine ecoregion with mountains, glaciers and forests that offers a rich environment for ecological research and conservation activities.

The construction of the new field station was funded through a $15 million grant from the CONICYT, the Chilean equivalent of the U.S. National Science Foundation as well as funds from UNT. The grant will help support research for the next 10 years.

Last year, UNT and the Universidad de Magallanes co-published a guidebook of the approximate 50 species of birds in Omora Park, including scientific and local knowledge of each species. Future projects include creating a similar guidebook for lichens, mosses and liverworts, known as the “Miniature Forests of Cape Horn,” and translating philosophy texts from Spanish to English and English to Spanish.