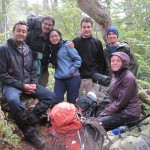 Ernesto Davis, M.S. candidate at the Universidad de Magallanes (left in photo), recently became one of the first UMAG students to obtain a scholarship from the Chilean National Science Commission (CONICYT). According to the evaluation, Mr. Davis was also the highest ranked applicant in the whole country. Previously, this student was also supported by OSARA and his thesis seeks to develop a habitat occupation model for invasive North American beavers in the Fuegian Archipelago.