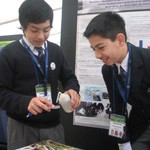 Since 2000, the Omora Park in Puerto Williams, Chile has conducted a permanent environmental education workshop as an elective in the local elementary school.

This course has allowed the school to be one of the first in the region to obtain environmental certification by the Chilean Environment Commission and also permits the students of the Omora Workshop to participate in the annual Magallanes Regional Science Fair with the support of the Explora Program of the Chilean Science Commission, the Provincial Government and the Institute of Ecology and Biodiversity’s Outreach Program funded by the Millennium Scientific Initiative.

This course also is supported by the researchers and students working in the Omora Park, and all graduate students conducting their theses and dissertations at Omora, for example, also serve as teachers in the workshop.

In previous years, the students of the Omora Workshop have placed well at the regional science fair, even coming in first place. However, we are very pleased to announced that this year the Omora students won first prize on the national level!

Their mentor was Tamara Contador, a UNT Ph.D. student in Biology who works with the Sub-Antarctic Biocultural Conservation Program, who helped them develop the award-winning project entitled “Diversity and abundance of freshwater invertebrates on rocky and submerged wood habitats in the Ukika River, Navarino Island, Cape Horn Biosphere Reserve,” which was presented in the competition in Concepcion by Carlos Saavedra and Francisco Olivares.

Congratulations to the students, mentors and teachers of the Omora Park’s education program in Puerto Williams!