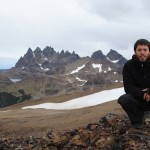 The first month of my Fulbright-Chile experience has already by far exceeded all my expectations. Once arriving to Punta Arenas I joined a group of students that I would be spending the next few weeks with for an international, interdisciplinary field course on conservation in the Cape Horn Biosphere Reserve. On arrival to Puerto Williams, the southern most town in the world, we began a number of activities with the park’s researchers. Our purpose was to gain a hands-on education in and contribute towards conservation through a series of multidisciplinary activities including group discussions, short lectures, artistic expression, community interaction, and field research among many other
field activities.

I was given the responsibility of teacher’s assistant (TA) for the course. As a recently recruited graduate student at the University of North Texas my advisors and Fulbright host thought it a great way to introduce me to the region while allowing me to support the program as Fulbright student.

The course, entitled Tracing Darwin’s Path, is a newly developed form of conservation which is conscious of and emphasizes the idea that biodiversity is inextricably linked to and supported by cultural diversity. The course introduced approaches and methods for developing solutions to local and global conservation issues; cultural and environmental. Specific highlights which came up often in the interviews were: a three day ferry ride through the beagle channel to Puerto Williams; three nights camping at Róbolo Lake; a basket weaving lesson with a member of the Yaghan indigenous community; the ability to assist in the research occurring on Navarino Island; and the international experience gained from interacting with students from all over the world and from many different disciplines.

When finished with the course most of us who were flying back to Punta Arenas from Puerto Williams were held up due to the protests occurring in Punta Arenas at the time over gas rate hikes implemented by the national government. Though for some it became a bit of an inconvenience, for me and most of the others, it gave the group some cultural insight on regional political issues. We felt compassion for the people fighting to keep affordable a resource needed for survival in the cold rainy climate of the Magallanic region.

Once I made it back to Punta Arenas I embarked on the first of a series of annual navigations to explore the spectacular isolated sounds of Tierra del Fuego with some of the world’s leading bryologists, and a team of Chilean students from the UMAG. The main intention of the navigations is to survey the region for its mosses and liverworts. All in all, the navigation was an unforgettable experience where I traversed terrains seen by few. Those images of the strikingly
sculpted mountains and brilliantly blue creeping glaciers will stay with me forever.

For the next two months I will be living and traveling between Punta Arenas and Puerto Williams for participatory research as a means to adjust my broader research methods to the contours of the local culture. My goals for the upcoming month are to refine my project methodology so as to be ready to begin field work in; make contacts with regional scientists and natural resource managers; summarize the results of my interviews, and continue developing a paper that I and a few others were inspired to start during the course.

A Boston University professor presented UNT students with a homegrown look at climate change Friday in a lecture that detailed the conservation biologist’s findings from a study of Henry David Thoreau’s former stomping grounds. Richard Primack and a team of students and biologists have spent the last eight years observing the same birds and plants once documented by the famous author and naturalist. Their comparisons of Thoreau’s environment to today’s Concord, Mass., area indicate that climate change is not exclusive to places reserved for National Geographic covers, Primack said.

“All of the examples of climate change seem to be from far away … People don’t see it happening in the plants and animals that are right around them,” Primack said in front of an audience of more than 75 people during the Friday lecture in the Environmental Science building. “The goal was to detect climate change locally to communicate this story to the general public.”