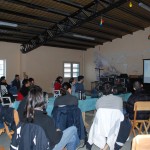 Dr. Guillermo Martínez Pastur, a respected forester and leader of the Forest Resource Research Group in the Austral Center for Scientific Research (CADIC-CONICET, Ushuaia, Argentina) was recently invited by the government of Sweden to be part of an elite team including 15 world-renowned forestry researchers to help rationalize the sustainable use of Scandinavian forests. Upon his return to Tierra del Fuego, Dr. Martínez Pastur convened a local workshop, held in the town of Tolhuín, to report the findings of this global effort to understand forestry in high latitudes, including experiences from Europe, North America and Tasmania.

As Dr. Martinez Pastur reported, the measures implemented in the Argentine portion of Tierra del Fuego Island are exemplary on a global scale, with up to 70% of a harvested forest being left for conservation. However, he also noted that many of these best practices are based on a local culture that has involved scientists in the development of their business models and should now be codified into rules and laws to prevent future companies lacking this ethic to become established and viciate the virtuous cycle that has been established.

According to Dr. Christopher Anderson, also invited to attend the workshop, “what really jumps to my mind about this effort is that Guillermo’s team is able to convene a group of people willing to spend a day discussing these issues of sustainable forest management that come from the public sector, including the Provincial Forest and Parks Services, the private sector, including representatives from the two leading forestry companies in Tierra del Fuego that make of 60% of forest extraction, and academics from both the CADIC and Chile.”